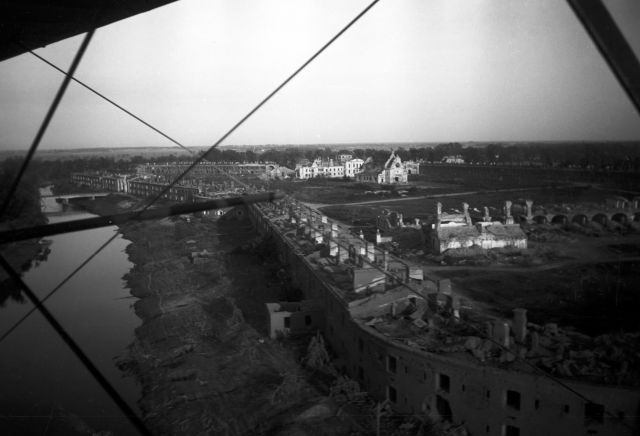 80 years after the beginning of the Great Patriotic War, Western politicians and historians, as well as many figures from the post-Soviet space, are trying to equate the communists and the Nazis, the USSR and the Third Reich. & nbsp;

Issued by a traitor and shot

It seems that representatives of the top leadership of Nazi Germany, if they had the opportunity to look into 2021, would be extremely surprised by such a formulation of the question. Hitler knew perfectly well who his main ideological adversary was.

One of the leaders of the defense of the Brest Fortress in the summer of 1941 was the deputy commander of the 84th Infantry Regiment of the 6th Oryol Red Banner Division, regimental commissar Efim Fomin .

On the first day of the war, Fomin led the defense of Brest fortress in the ring barracks on the site near the & nbsp; Kholmsky gate. Three days later, the 32-year-old commissar led a failed attempt to break out of the fortress.

After the war, one of the surviving members of the fortress's defense Alexander Fil In a letter to Yuri Fomin's son Yuri, he wrote: “ Your father, regimental commissar Fomin Yefim Moiseevich, was the first organizer of the defense of the fortress and until the last minutes of the struggle he believed himself and inspired the soldiers of the victory of Soviet weapons over fascism. In the last minutes of the battle, he was in a simple Red Army sweatshirt, a tunic with insignia and a TT pistol, when he ran along the line of defense past me and other comrades, encouraging me to stand to the death. ''

Fomin, who received a shell shock, was taken prisoner in the barracks of the 33rd regiment on June 30, 1941. On the same day he was shot. & Nbsp;

“Political commissars are the inventors of barbaric Asian methods of struggle”

Sometimes you can read that this was done out of irritation with the stubbornness of the defenders of the fortress. In reality, the Nazis strictly followed the instructions of the top leadership of the Third Reich. One of the prisoners pointed to Fomin as a regimental commissar, and the fate of all commissars was predetermined by Hitler even before the start of the war.

Chief of the General Staff & nbsp; Land Forces & nbsp; Germany Franz Halder in his diary wrote down the words of Hitler, uttered at a meeting with the high military command of the Wehrmacht on March 30, 1941: “ Communism & nbsp; & mdash; the greatest danger to the future. We must abandon the point of view of soldier comradeship. A communist cannot and will not be a comrade. It's about the fight to destroy. If we approach this issue differently, then we may defeat the enemy, but in 30 years we will again be face to face with the communist enemy. We are not waging a war to save our enemy … The fight must be waged against the poison of decay. This is not a problem with military tribunals. Troop commanders must know what this is about. They must lead the fight. The army must defend itself using the same means used by the enemy. Commissioners and employees of the GPU & nbsp; & mdash; they are criminals who should be treated appropriately. ''

On June 6, 1941, the High Command of the Wehrmacht issued the Directive on the Treatment of Political Commissioners, better known as the Order of the Commissioners.

The text of the directive, in particular, read: “ In the fight against Bolshevism, one should not expect the enemy to adhere to the principles of humanity or international law. In particular, political commissars of all ranks, as direct organizers of the resistance, should be expected to be filled with hatred, cruel and inhuman treatment of our prisoners. Troops should remember the following:

1. It is wrong to spare such elements in this struggle and treat them in accordance with the norms of international law. These elements pose a threat to our own security and to the rapid pacification of conquered areas.

2. Political commissars are the inventors of the barbaric Asian methods of struggle. Therefore, it is necessary to take measures against them with the utmost severity immediately and without any talk. Therefore, if they are captured in battle or show resistance, as a rule, they should be immediately destroyed. '' & Nbsp;

“ You will not kill the cause for which you fought! ''

The document was signed by the deputy chief of staff of the operational leadership of the Wehrmacht Walter Warlimont … After the war, he fell into the hands of the Allies, was put on trial, in particular, for this signature, and sentenced to life imprisonment. True, in 1957 he was amnestied, so that the war criminal lived out his days in silence and comfort.

The lawyers of the German high command tried to prove that in practice the “ Order on Commissioners '' not executed. However, Fomin's fate suggests otherwise. And not only his & mdash; & nbsp; thousands of Soviet political workers who ended up in the hands of the Germans in 1941-1942.

Deputy & nbsp; political instructor & nbsp; 4th outpost of the 17th Red Banner Brest border detachment Ivan Belyaev on June 23, 1941 covered the departure of border guards of the 4th outpost. When the ammunition ran out, the political worker took refuge & nbsp; in the attic of one of the houses in the village of Rudavets, but was betrayed by a traitor.

From the story of the witness of the execution Elena Kovaleva : “ You cannot imagine a picture of the shooting … ; Worth Ivan Petrovich at the wall. He courageously and boldly looks at the enemy prepared for his execution. Romanovsky's fist is digging a grave at his feet … And he stands with open blue eyes, all wounded and bleeding, & nbsp; and says: “ I know you will kill me, you bastards. But you will not kill the cause for which you fought! Goodbye comrades! We will come to the Bug! Communism will win! '' & hellip; He and his father were shot by the Kolchakites, and the older brother was killed by the kulaks in the thirtieth year. '' & Nbsp;

Scientific Secretary of the Institute of Russian Literature Philip Kanaev went to the front on June 22, 1941, became a battalion commissar in the 110th regiment for the protection of railways of the 2nd division of the NKVD troops.

Historian Yegor Yakovlev found data on the fate of Kanaev, missing in September 1941, in the materials of the so-called “ small Nuremberg trials. ''

September 25, 1941 on the bank of the river Tosno Kanaev was captured by soldiers of the 28th Army Corps. From the German execution report, the text of which Yakovlev published on his Facebook page: “ Battalion Commissar Kanaev was found sleeping on the banks of the Tosna near the mouth of this river. He was taken prisoner and shot after careful interrogation. The railroad guard regiment was tasked with guarding the Pskov line & mdash; & nbsp; Opochka & mdash; & nbsp; Leningrad. He was surrounded along with the 41st Corps and completely destroyed during the breakout attempt. The regiment consisted mainly of elderly reservists. Very few of the officers were in the party … Kanaev was under the command of the regimental commissar and was an instructor in organizing party work. He was supposed to carry out the political training of the soldiers and was responsible for their moral character. Among other things, he had at his disposal a regimental cinema van for this. The papers found at Kanaev's are attached to this letter. '' & Nbsp;

You won't shoot everyone

According to the German historian Felix Römer , the author of the book “ Order of the Commissioners. Wehrmacht and Nazi crimes on the Eastern Front '', executions of captured Soviet political workers were carried out in all 13 armies, 44 army corps and more than 90% of divisions out of 150. At least 4,000 executions of commissars and political instructors taken prisoner in 1941-1942 have been fully confirmed. … Römer, relying on the documents, believes that in reality about 10 & nbsp; 000 Soviet political workers taken prisoner were executed.

'Order on Commissioners' was canceled in June 1942. The Hitlerite command came to the conclusion that he was not fulfilling his goal. It did not work to demoralize the commissars and political instructors, who already knew what fate awaited them. On the contrary, the communists in the ranks of the Red Army fought to the last bullet, and by their example they inspired ordinary soldiers.

The abolition of the order did not at all mean a revision of the previous extermination policy towards the communists. It's just that since 1942, the Nazis decided to make the massacre non-public. Political workers were weeded out from the general mass of prisoners of war, cracking down on them in the rear. & Nbsp;

But, looking today at the attitude of some historians and politicians towards the communists in the ranks of the Red Army and the assessment of their role, one cannot get rid of the feeling that these “ truth-seekers '' act in the spirit of Hitler's 'Order of Commissars'. Only now they shoot the memory of the fallen with streams of lies.