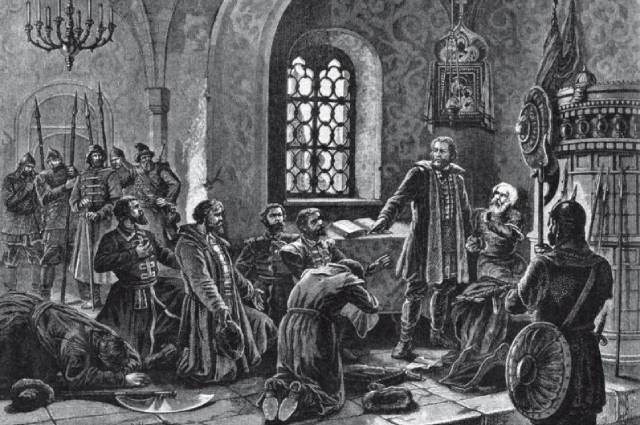 435 years ago, on November 18, 1586, in the family of the first voivode of the Great Tsarist Regiment, Prince Vasily Skopin-Shuisky , a representative of the senior branch of Rurikovich, there was an addition. A son was born. A few days later, the baby will be christened with the name Mikhail. This will happen just on one of the most revered holidays in Russia: the day of the Archangel Michael.

Actually, the full name of the holiday is & mdash; Cathedral of the Archangel Michael and other ethereal heavenly forces. It is Michael who is at the head of the heavenly host. And if you believe that the name imposes some obligations on a person, then this case – & mdash; the most striking illustration. Mikhail Skopin-Shuisky & mdash; one of the best, if not the best, Russian commander of the 17th century.

His military career was short. It began in the fall of 1606 and ended with the death of the commander in the spring of 1610. In total, four incomplete years. Rather, even three and a half. But these were years of continuous victories. Moreover, victories won in an extremely difficult situation, which at times bordered on a national catastrophe. And every time it was through the efforts of the young prince Skopin-Shuisky that it was possible to postpone this catastrophe.

In general, the figure of Skopin-Shuisky is usually considered in close connection with the figure of Vasily Shuisky, the last Russian tsar from the Rurik dynasty. By the way, the young prince was the king's fourth cousin. And this is the only truth in the approach that the textbooks demonstrate. Because after ascertaining the relationship between the commander and the king, sheer horror begins there. Say, the old tsar almost immediately began to envy the successes of the young governor, and then, as his success grew, he ordered his nephew to be killed.

In reality, the opposite was true. The king initially pinned great hopes on a relative. We can say that it was Skopin-Shuisky who was the military guarantor of the Tsar's stay on the throne, which made cooperation between them very active and fruitful.

Skopin-Shuisky showed his military talents immediately, in the first serious assignment. 1606, October. The army of the “ peasant leader '' is rushing to Moscow, and to be honest, one of the commanders of the destroyed False Dmitry, & mdash; this is how Ivan Bolotnikov called himself. He leads not so much abstract “ peasants '' as “ Ukrainian Cossacks '' and an elite corps of ten thousand foreign mercenaries: landsknechts and artillery. There is nothing to defend the capital with: more or less solid forces still need to be brought up to it. But this takes time. And Bolotnikov took a very good pace. In theory, Moscow was supposed to fall.

But a young voivode enters the field, who has not yet turned 20 years old, and in the battle on Pakhra he inflicts a strong blow on Bolotnikov. The offensive impulse of the rebels is not only weakening, but is temporarily fading away. Bolotnikov is forced to abandon the plan to storm Moscow head-on: he has to look for other ways. He finds them. But it is losing pace. The Tsar manages to gather troops to the capital.

It was at that moment that the most successful tandem of uncle and nephew was formed. A tandem that could have ended the Troubles a few years earlier and prevented the nightmare of the Seven Boyars, the transition to external control and the actual dismantling of Russian statehood.

The Tsar perfectly understood the simple truth: “ To fight a dragon you need a dragon. '' And in that very year 1606, he makes the most important decision. The Russian language is hastily translated & nbsp; treatise by baron Leonhard Fronsperger Kriegsbuch. Here it is known as the “ Charter of military, cannon and other matters related to military science. '' This is a classic of military science of the time. All European armies are fighting based on these theoretical calculations. Since 1608, the Russian army has been fighting like that.

But not all, but only that part of it, which is under the command of Mikhail Skopin-Shuisky. It was he who initiated the translation of theoretical work and the adaptation of European methods of modern combat on Russian soil. And this was done almost at the last moment. As soon as they managed to defeat Bolotnikov, a new thunderstorm burst out: False Dmitry II, he's a Tushinsky thief. Backed up by the Poles, led by Jan Sapieha , cousin of the Grand Chancellor of Lithuania Lev Sapieha.

He was an experienced commander, even partly a military thinker, who had once studied at the University of Padua. It is he who is responsible for the almost complete blockade of Moscow, the siege of the Trinity-Sergius Lavra and the incredibly brutal robberies on the Russian lands controlled by the Tushino thief. His famous winged hussars, the elite cavalry of the Commonwealth, brought victories over and over again. In Russia, they had nothing to oppose.

But only until Skopin-Shuisky stood at the head of the army, supported at the very beginning by Jacob De la Gardie's five-thousandth corps of Swedes. However, after the victorious battle for Tver, the Swedes rebelled: Skopin-Shuisky's treasury was empty, and the mercenaries were unable to pay their salaries. So then the Russians fought themselves: in the army of Skopin-Shuisky there were very few Swedes left, hardly a thousand.

And here it turned out that the Russians, who in the shortest possible time had mastered the new charter created by the efforts of the tsar and his nephew, were fighting very well. In the battle of Kalyazin, Skopin-Shuisky turned the famous “ winged hussars '' to flight. Sapega was furious: some Russian boy made him ridiculous. But that was only the beginning. Prince Michael, as they say, got a taste. With a successive series of battles, he occupies all key points, cuts off the presumptuous Poles from the main forces and unblocks the Trinity-Sergius Lavra. Moreover, he applies all military innovations from European theoretical works. But he adds something from himself. So, in the winter of 1610 Skopin-Shuisky formed a flying squad of skiers, which, in fact, decided the case near Moscow: one blow to Dmitrov & mdash; and that's it, the blockade has been lifted. The Tushino camp falls apart, the Poles and the 'Ukrainian rabble' run. If Skopin-Shuisky continued to remain at the head of the Russian army, the Troubles would be over.

But in May 1610, Mikhail Vasilyevich dies. Most likely, he was poisoned. It is customary to blame Vasily Shuisky for this. And even his sobs over the coffin of his nephew are considered crocodile tears.

In fact, the tears were sincere. If only for the reason that the king mourned not so much a relative as himself. He perfectly understood that there was simply no commander of this caliber in Russia at the moment. And there is nowhere to take it. And from the west there is a new Polish wave that needs to be stopped. No, there was no benefit in breaking the last barrier that separates the king from dishonor, shame and death.

Apparently, the death of Skopin-Shuisky lies on the conscience of those who did not need a king. Those who contemplate to “ pass '' Vasily Shuisky to the Poles. And then & mdash; independently “ reign and own all. '' Boyar elite & mdash; that's who was interested in defeat and entered into an agreement with the enemy.