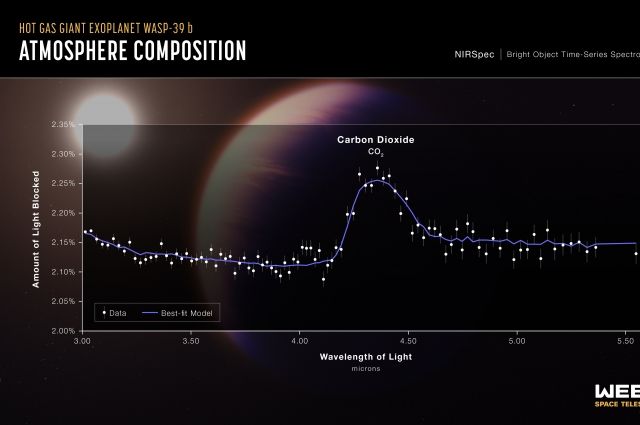 Evidence of the presence of carbon dioxide in the atmosphere of an exoplanet was first detected by astronomers using the James Webb telescope, according to the science and technology news site Phys.org.

A team of scientists led by a professor of astronomy and UCLA astrophysicist Nathalie Bataglia has identified signs of carbon dioxide during her observations of the Saturn-mass planet WASP-39b, which orbits a sun-like star about 700 light-years from Earth.

According to Bataglia,  while observing the exoplanet with the Hubble and Spitzer telescopes, astronomers saw “hints” for the presence of carbon dioxide on it, which was confirmed using James Webb.

«Carbon dioxide is actually a very sensitive measuring device– the best we have – for the heavy elements in the atmospheres of the giant planets, so the fact that we can see it so clearly is really great, – said Jonathan Fortney, professor of astronomy and astrophysics at the University of California, Jonathan Fortney.

Earlier, NASA presented the clearest infrared image of the galaxy cluster SMACS 0723 at the moment, taken by the James Webb telescope.

arrow_back PREVIOUS POST
arrow_backThe heat in Moscow broke the temperature record of 1969
NEXT POST arrow_forward
In the Ryazan region, forest fires have moved to peatlands