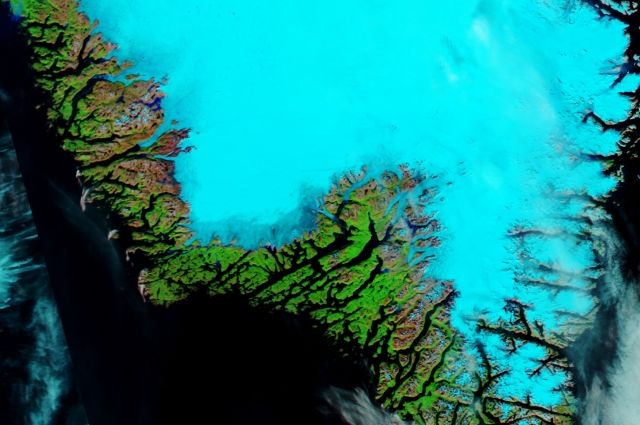 This summer, it was abnormally hot not only in Europe, but and in the north of the Atlantic. Glaciers of Greenland — and there is the second largest ice sheet of the planet after the Antarctic — began to melt even faster. In                   recently published  In the journal Nature Climate Change, a study is devoted to the melting of ice reserves that could raise the level of the world's oceans by at least 27 centimeters. Scientists call it “zombie ice” — probably because it is doomed to melt away.

The point of no return passed two years ago

The melting of the Greenland glaciers is on the rise. This summer, the peak of ice destruction occurred on 15-17 July. The scientists who work on the island even walked around it in t-shirts these days. “The amount of ice that melted in Greenland between July 15 and July 17 would have been enough to fill 7.2 million Olympic swimming pools. That's 6 billion tons of water a day!  — one of them told reporters.

Such a rapid melting of ice is difficult to recognize as the norm, even taking into account the average climatic indicators of the last 30-40 years. Scientists believe that the disappearance of the Greenland ice sheet passed the point of no return a couple of years ago. Now, no amount of efforts to prevent global warming will be able to stop it. And if this giant shell of ice melts entirely, then the level of the World Ocean will rise by 7.5 meters.

A recent study by Danish glaciologists focuses on only a small part of the Greenland ice sheet. This is the so-called “zombie ice” — it is attached to large glaciers, but is no longer fed by them as they receive less and less snow due to climate change. Without replenishment, it doomed to melt and inevitably raise the sea level.

“This is dead ice. It will simply melt and disappear from the ice cover. It will go to the ocean, no matter what scenario of greenhouse gas emissions and climate change awaits us  — says glaciologist at the Geological Survey of Denmark and Greenland, William Colgan, one of the authors of the study. Another researcher, Jason Box, notes that the situation is increasingly reminiscent of the expression “one foot in” the grave.

Calculations show that the rapidly melting ice of Greenland by 2100 will raise the level of the World Ocean by at least 27 centimeters. In a pessimistic scenario, the rise is expected to be three times greater, up to 78 centimeters.

As if you put an ice cube in hot tea

A year ago, the Intergovernmental Panel on Climate Change, operating under the auspices of the UN, published a regular report on what lies ahead for the planet. The section on sea level rise says that even if the warming process stops at +1.5 °C compared to the pre-industrial period (and this mark will be reached by 2040), sea level by the end of the 21st century, it will still grow by at least 2-3 meters. The contribution of Greenland's glaciers to this value, according to UN experts, will be from 5 to 13 centimeters.

It is easy to see that last year's forecast of climatologists diverges from what scientists from the Geological Survey of Denmark and Greenland claim in their current study, and after all, they work directly on the glacier. Even the minimum sea level rise predicted by them (27 centimeters) is twice the maximum figure voiced by their colleagues a year ago (13 centimeters).

What did these scientists do? They analyzed how the Greenland glaciers are replenished (this is due to precipitation, but less and less), using a generally accepted methodology for calculating minimum ice loss. It turned out that 3.3% of  its total volume will melt in any case. Moreover, even these 3.3% — huge mass. If you distribute this “zombie ice” evenly over the United States, the height of the layer will be 11 meters.

How long will it take for that the “doomed” the ice has melted, scientists don't know yet. But most likely, they say, it will happen by the end of the century, or, at the very least, by the year 2150. Glaciologists compare this process to  like putting an ice cube into  hot tea.

It may seem that 27 centimeters — it's not so much. But if you add them to tides and storms, which are already causing problems for the inhabitants of densely populated coastal zones, it becomes clear that even such a slight increase in sea level will lead to huge social, economic and environmental consequences.

< p>To and the same, as already mentioned, there is a pessimistic scenario. If the Greenland ice melts at the rate that was observed in 2012, and this begins to repeat annually, the rise in the level of the world seas could be 78 centimeters. The result will be flooding of large areas of low-lying coastlines, increased flooding and storm surge.

arrow_back PREVIOUS POST
arrow_backElizabeth – faith, talent and seals. What was the real Empress like?
NEXT POST arrow_forward
Smallpox will be defeated again. What is the new cure for monkey disease scientists have found?