Plot Special operation of the Russian Federation in Donbass and Ukraine

Russian special forces involved in the NMD in Ukraine received for testing a batch of Chukavin army sniper rifles developed by the Kalashnikov concern. According to RIA Novosti, citing a source in the military-industrial complex, the first reviews received were positive. A few years ago on Gunsmith's Day in Patriot Park this rifle was personally tested by Russian President Vladimir Putin. 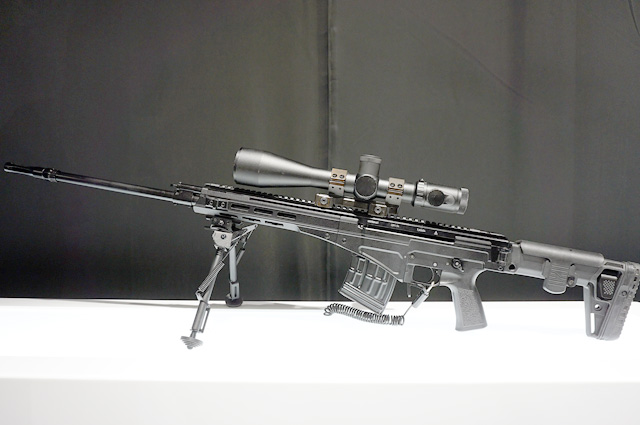 The developers position their weapon as a modernization of the classic — Dragunov sniper rifle. This is its lighter and more compact version, while maintaining the reliability and versatility.

Rifle Chukavin — the latest development of the concern “Kalashnikov” in the field of high-precision small arms. It, according to the developers, is made according to an unusual scheme for Russian and Soviet weapons. Almost the entire load falls on the upper steel part, which results in a reduction in the overall weight of the rifle without loss of reliability. The lower part of the rifle due to this scheme does not have to be strong, so it can be made as light as possible by choosing other materials — plastic or light alloys.

Its barrel is made by the method of radial compression. The buttstock, receiver and barrel are on the same line, which reduces the toss of the weapon when fired. Professionals who have already had time to shoot note a significant decrease in recoil, which allows them not to slow down the rate of fire, without losing sight too much. It is equipped with a Picatinny rail for the entire length of the receiver for mounting any attachments. In the traditional scheme, the receiver was closed with a lid. This openness simplifies the mounting of night vision devices, thermal imaging attachments and other aiming systems.

The safety is in a natural position for the shooter's finger. The reloading handle is on the left, which allows you to perform this action in the prone position. The telescopic sight has a “cheek” adjustment. The developers compared it with the classic — the legendary Dragunov sniper rifle (SVDM), a symbol of Soviet and Russian weapons. SVD, although it is a classic, no longer meets the requirements of the military for such weapons. In particular, it is too long, it is not possible to use the calibers that are now common, it is impossible to install various sights on it.

SVD has a length of 1155 millimeters, in microwave it is 995-1015 millimeters. Vladimir Putin tested a commercial version of the 308 Win, made under the NATO cartridge.

Magazine capacity SVDM 190 rounds, microwave — 10,15 or even 20 rounds. Some experts believe that the sniper does not need to have such a large magazine, because his task is most often to track down the target, take a shot and get out of position as quickly as possible. On the other hand, a large magazine can be in demand in combat conditions, when the sniper does not know when he can “refuel” next time.

The mass of the microwave is 4.2 kilograms against 5.3 of the Dragunov rifle. Even such a reduction in mass is critical for combat operations, where, as in space, every kilogram is accounted for.

Compactness, lightness, versatility, the ability to use any attachments — here are the main features of the new weapon.

Interest in such weapons is shown in the Ministry of Defense and the Russian Guard, as well as abroad.

Expert in the field of weapons and military equipment Sergey Suvorov told aif.ru that, based on the results of combat operation of the Chukavin rifle, the military can conclude how well this weapon performed in a real combat situation and how necessary it is in the troops.

“Perhaps the designers will receive recommendations to refine or improve something. It won't save the rifle from passing all the rigorous tests, but if it performs really well in combat, it can speed them up, — summed up the expert.

arrow_back PREVIOUS POST
arrow_backThe court terminated the administrative proceedings in the case of Christina Asmus
NEXT POST arrow_forward
Is it true that WhatsApp will have a function to hide online status?