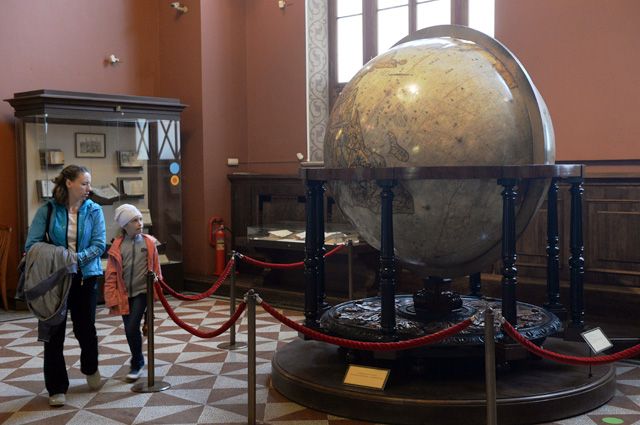 This year the State Historical Museum is celebrating 150 years since its creation. This year can also be considered a kind of anniversary for one of the most notable exhibits – Blau's globe, which was transferred to the Historical Museum 110 years ago, in 1912.

About the difficult fate of a difficult subject that influenced the fate of Russia and the world, “AiF” said senior researcher at the Department of Written Sources, curator of the Cartography Fund of the State Historical Museum Vladimir Bulatov.

What's in the name?

The creator of the globe Jan Blau(1596–1673), like his father Willem Blau, who established the production of globes, was the chief cartographer of the Dutch East India Company. This company had a monopoly on trade throughout the Indian and Pacific Oceans. She owned huge territories there. In a word, it was a powerful, very rich and influential concern that played a significant role in European and world politics. And among the people managing this concern, it was the cartographer who played an important role.

One and a half ships

The main customer of the globe was the Swedish queen Christina. The famous lady, brilliantly educated, knowing many modern and ancient languages, patroness of sciences and arts… The globe, unparalleled, was to be the decoration of her office. But the Queen was too independent. She fell in love with the Spanish ambassador in 1654. abdicated, converted to Catholicism, and left Sweden. She was allocated a certain amount for maintenance, she received income from several Baltic lands, but this was clearly not enough to buy such a status item. 16 & nbsp; thousand guilders – the mind is incomprehensible! The standard price of a transoceanic vessel of the type “flutes” at the shipyards of Amsterdam in those days was not more than 10 thousand. guilders.

We regularly conduct visitor surveys. One of them included the question “What do you remember the most?”. Blau's globe was in first place. In March 1711  Peter I, having got this globe, ordered to place it in Kremlin. He wrote to the Moscow Governor Tikhon Streshnev: “On” a large globe, look for some special dry chamber in the Kremlin, where it would be safe from a fire, and, having broken through the doors, put that globe in it. In the end, the doors decided not to break – a separate extension was composed for the globe, where it, together with the legendary boat of Peter, became available to the general public. In fact, it was the first museum, and the globe became the first museum exhibit in Russia – The Kunstkamera will be founded only in 1714 g. But the words of the sovereign about breaking the doors turned out to be prophetic. The fact is that the globe cannot be brought into any of one of our doors. It is wider than any entrance to & nbsp; this room & ndash; the diameter of the sphere itself is 171 cm, and that's not counting the stand! So I had to break through the openings and then restore them.

For more than 20 years, the globe has been a museum exhibit in Moscow. B 1733  he was transferred from Kremlin to Sukharev Tower, where he became a teaching aid – it was used by midshipmen, cadets of the Navigation School – this is reflected in the film "Midshipmen Go!". The movie, in fact, begins with the fact that in a large globe resembling Blau's brainchild – – it is possible that the filmmakers knew the history of our exhibit and took care of the correct props… B 1752  the globe was sent to St., who himself once studied at the Navigation School. He designed a special lightweight sleigh carriage that made it possible to get by with fewer horses, but which ensured transportation without breakdowns and losses. And soldiers accompanying valuable cargo were forbidden to smoke near the cart. height=”600″ width=”666″ style=”display: block;” />

Peter bought the globe in 1707 not for 16 thousand guilders, but for 1.8 thousand. How did his agents manage to bring down the price? Here you need to understand why it was prohibitively high. By and large, the globe reveals some of the geographical secrets of the East India Company. Who, for little money, will part with information that can get to competitors? But by the beginning of the XVIII century. these secrets are no longer secrets. Yes, and the globe began to become obsolete. Please note: California (1)and Korea are depicted as islands here, instead of the usual outlines of the Caspian Sea (2) — some kind of amoeba, but Kamchatka (3)and not at all. By the way, the globe became obsolete, including through the efforts of Peter himself. The tsar signed a contract with the Nuremberg cartographer Johann Homann for the preparation, production and sale of new maps of Russia in Europe, which was supposed to increase the international prestige of the country. In particular, the Caspian Sea and Kamchatka — the result of Russian geographical discoveries.

The language of geopolitics of the 17th century.

In addition to the idea of ​​geography, Blau's globe also provides information on current politics. But in a very different way.(4)

In Europe, the Dutch did not draw state borders, but the borders of historically established regions. Let's say Bohemia. And no matter who owns it – an empire or some kind of duchy. Bohemia remains Bohemia. And with the colonial possessions another calico. The Dutch cartographers did not translate the names. What the Spaniards discovered is called in Spanish on the globe. What belongs to the British, – in English. What the Dutch own, – in Dutch. As a result, the alignment of forces in the ongoing colonial redistribution of the world is clearly visible. By the way, with some degree of caution, we can talk about another conditional anniversary of the globe. The Dutch colony of Kapstadt (now Cape Town) on the Cape of Good Hope, founded by Jan van Riebeek370 years ago, in 1652, is indicated here. This means that the globe was not made earlier than this date.

Any whim for your money?

One European border on the globe is of more interest to us than others. Let me remind you: the Great Northern War of 1700 1721  is going on, Sweden and Russia agreed in large-scale confrontation. How is the border between them marked on the Dutch globe?

Why is that? Blau's firm found itself in a difficult position. When she was preparing a globe for Christina, it was necessary to show the borders as beneficial to Sweden as possible. When the deal with Peter did grow together, it was necessary to do the opposite. It cannot be ruled out that the Dutch, versed in politics, reacted to the change of customer and drew a border that was more flattering for Peter. But & nbsp; there are no traces of removing varnish and & nbsp; traces of cleaning. Most likely, the double border was originally drawn – perhaps to emphasize the power of Sweden. Here, they say, as it was in 1595 g. and and that's how cool Sweden has moved east by now.

arrow_back PREVIOUS POST
arrow_backShow up without delay. Stories of those who were called
NEXT POST arrow_forward
Biden rules out recognition of referendum results in Donbass